Only recently, reading a biography of American artist John Sloan, did I realize that the gentrification of the great old American cities has destroyed the very platform upon which artists forged not only professional careers, but the very foundation of all modern art. Low rents were available across the wide range of American cities from the end of the Civil War in 1865, through the early 1970’s, and that 105 years represents the full emergence of Modern American art. 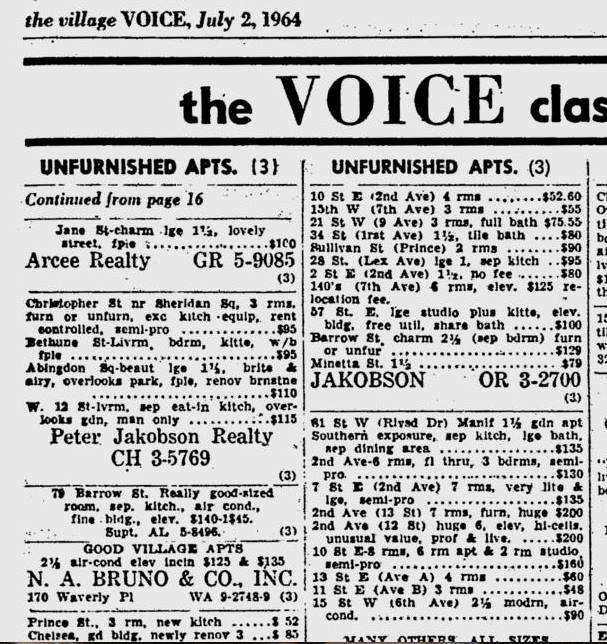 As a young man starting out at the Art Students League, as a full time student, in 1965, I rented a studio apartment on Morton Street in Greenwich Village for $50.63 (yes, change was part of many rents). My landlord was Mr. Levine, owner also of Levine’s Paints on 7th avenue south, just north of Sheridan Square. That was when the Village Voice was in an old two story building at the northeast corner of 7th and Waverly.

My reason for including that anecdote about the Voice is that is where we late 20th century apartment hunters found our “castles”, (affectionately still called “pads”), every week, in the classified.

Every Wednesday evening at about 7:00pm, a runner would emerge from the Voice office carrying a bundle of newly printed papers to the newsstand still on 7th today next to the IRT station. That was where I found my place, and rented it the next morning.

First, imagine this happening today; I am dressed in my ragged blue jeans all festooned with sloppy paint wiped on them by this 18 year old, with scruffy long hair.

When I entered the paint store, I asked for Mr. Levine, who came out and looked me over. “You’re not planning on painting in that apartment, are you?”

“Oh no, Sir! I do all my painting at the Art Students League. I simply want to live there.” Sure. See no landlords wanted artists, or so they claimed, but we all had “pads” and all of us painted in them. As acrylics were not readily available in a full range of colors, most of my peers still worked in oils. That was the complaint, the fire danger of turpentine paint rags, stinking up the building and potentially proving destructive.

It was well known that if you stuffed bath towels in the door cracks, the smell of the turpentine stayed mostly in your room.

This apartment was affordable. You could make $50. per week on any temporary part time job, and one week’s pay was one month’s rent. Please do not think I was the only person able to secure such an inexpensive life style. There was a theory extant that  many called ”The Unwritten Law of Labor”; no one’s monthly rent should ever exceed 25% of their income. That was how all people lived back then. Believe it or not, there was no such thing as Homelessness. Though I paid a “high rent” of $50.00, my fiends lived on the lower east side off avenue A, in 4 room railroad apartments for $22., some for a little more or even less. One friend had a huge loft on Broome Street for $60.00 a month. Another for $30.00 on Great Jones Street, a block south, off Bowery. Bowery is a Dutch word for “sheep grazing land”.

The men you saw on the Bowery by day lived by night in any one of the long row of flop houses, stretching from Astor Place to Houston Street, where beds could still be had for as little as .50 cents a night. Some offered showers for $1.00 a night but the Saint Marks Baths were only a couple of blocks north. They were not homeless, often badly deteriorated alcoholics, who had been, Professionals; i.e. Doctors. Lawyers, Dentists and movie Directors. If they could hold down any kind of part time work they would never be homeless.

Consider the lives of the artists familiar to all, in Europe and in the United States, who worked in the late 19th century and the early 20th century. The artist I mention in the opening paragraph found a great studio in Greenwich Village on Waverly Place in the early 1900’s for only $100. It was two floors. I rented one half of a huge basement in the same building that Sloan and his wife Dolly moved into in 1903; 240 West 4th Street, and I paid $60.00 for the entire space. I had a backyard, as well, by the way. That studio space allowed me to produce the work in the quantity and sizes required to show in Avanti Galleries off Park Avenue in the early 1970’s.

Space like that is a pre-requisite to practice serious painting or sculpture. When we allowed changes in the evaluation of real estate in the late 1970’s, we sold out all the progress that made Impressionism, Post-Impressionism, Cubism, Synthetic Cubism, Fauvism, Futurism, Surrealism, Neo-plasticicity, Expressionism, Abstract Expressionism, Pop Art, Op Art, Hard Edge Abstraction, and Minimalism, possible.

Artists cannot develop correctly kept away from the Museums and Theatres, the Concert Halls. When artists are forced away from one another because of Gentrification, the creation of art movements to carry on the work that ended in 1973, will never exist again.

All the great artists of the past came from the great old cities and they rose to the top because their environment lent itself to their development. Since the artists were driven from the inner cities by the Rich, art has been doled out to the Universities which never could compare to, The Art Students League of New York, The National Academy of Art, in New York. The Pennsylvania Academy of Fine Art, in Philadelphia. The Ecole des Beaux Arts, in Paris. Der Rijksakademie Van Beeldende Kunsten, in Amsterdam, or the Chicago Art Institute.

If we detect a shortcoming of quality in commercial entertainment, that favors vulgarity to studied communicative expression; comic or tragic, it is because there is no way for a Bette Midler to rent a flat on Bedford Street in 1965 for $60.00 and work her way to the Broadway Stage and on to a major career as an International star of music, stage and screen, affordably.

Affordability was why we had The Marx Brothers, The Gershwin Brothers, Nick Adams, Frank Sinatra and every other great artist of the 20th Century.

I must admit, I acquiesced to the idea of “regionalization” when I left New York in 1975 in search of cheap rent. It did get me to teach many the skills I had learned in New York, but with artists unable to mingle at local bars and coffee shops, shop in the same stores, sleep in the same streets and do their art closest to each other and the irreplaceable institutions of art that only exist in our major cities, there will never be a movement in Art like we have come to expect from centuries of progress, lost forever, to the Gentry?